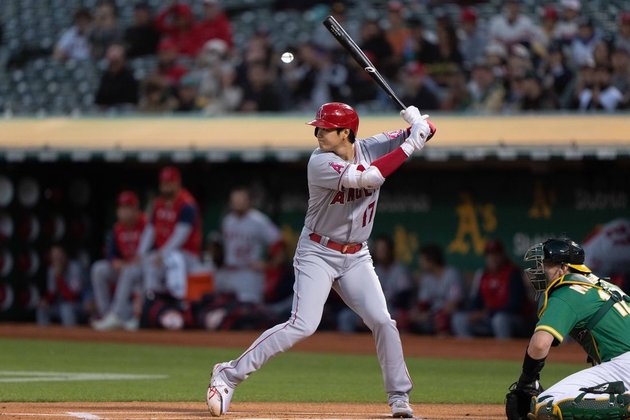 It might turn out to be too little, too late, but Los Angeles Angels two-way star Shohei Ohtani gets a chance to make a final impression on American League Most Valuable Player voters Wednesday.

Ohtani gets an opportunity to both hit and pitch in the Angels' regular-season finale against the host Oakland Athletics.

Starting pitching has been dominant in the first two games of the series between AL West also-rans, with three of the four starters -- including both Tuesday -- calling it a night after throwing six shutout innings.

Ohtani took a crack at evening the series with a blast to center field with two aboard in the 10th of a 1-1 tie Tuesday. But A's center fielder Seth Brown hauled in the bid for extra bases just before crashing into the wall, sending Oakland to the plate, where Shea Langeliers' bases-loaded walk ended a 2-1 victory.

Brown, who had two hits and three RBIs in Monday's win before driving in the A's' only regulation run in the rematch, admitted Ohtani's powerful reputation got the better of him on his attempt at another heroic feat Tuesday.

"He does a phenomenal job of hitting the ball in the gap," Brown said. "I wanted to save that (left-center) gap a little bit. It was kinda hit in a perfect spot for me to get a good read on it, and be able to make a play."

One day after AL MVP favorite Aaron Judge set a league record with a 62nd home run, Ohtani could possibly reach 35 homers, 100 RBIs, 16 pitching wins and 225 strikeouts all in the same day.

"I feel like you guys are more of an expert on the voting. I'll leave it up to you guys," he said to reporters last week. "I enjoy watching Judge."

No doubt Ohtani (15-8, 2.35 ERA) could capture the attention of voters one last time by finishing off a feat he approached when he pitched at home against the A's last week. He took a no-hitter two outs into the eighth that night before Conner Capel grounded a single up the middle.

The right-hander -- and the Angels (73-88) -- have gone unbeaten in his last six starts, during which he's gone 5-0 with a 0.90 ERA. The stretch includes starts against the Toronto Blue Jays, Seattle Mariners and A's last Thursday, in which he did not allow a run.

The 28-year-old has gone 2-1 in three starts against the A's this season, allowing two earned runs in 19 2/3 innings with 22 strikeouts. He will be making his 10th career start against Oakland, having gone 4-3 in the first nine with a 2.56 ERA.

The man tasked with both matching pitches with Ohtani and keeping him in the ballpark will be A's lefty Ken Waldichuk (1-2, 6.18). He rebounded with a strong effort in his start against the Seattle Mariners last Friday after having gotten bombed by the Houston Astros and New York Mets in his previous two starts.

The 24-year-old rookie has never faced the Angels.