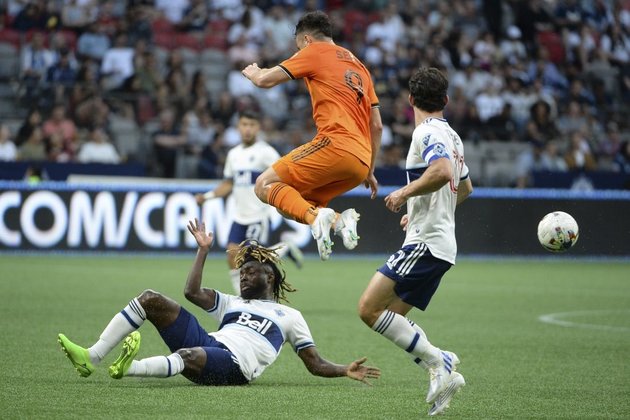 The Whitecaps (8-10-6, 30 points) trailed 1-0 until the 88th minute, when substitute Simon Becher equalized in his MLS debut. That set the stage for Cavallini to create even more late-game magic for Vancouver two minutes into added time.

Following a corner kick, Ranko Veselinovic kept possession for Vancouver and found an open Cavallini in the box. The striker connected for his eighth goal of the season and a pivotal three points for his team.

Late goals have become a habit for the Whitecaps this season. Vancouver has scored 10 goals in the last 15 minutes of games this season, with eight of those tallies clinching either a win or a draw.

Vancouver won for the first time in six games (1-2-3), but the team is now only two points behind the Seattle Sounders for the final Western Conference playoff spot.

The heartbreaking loss put Houston (7-13-4, 25 points) even further behind in the playoff race. The Dynamo are on a three-game losing streak, and they remain in 12th place in the West.

Fafa Picault gave Houston the early lead just six minutes into the game. Replays were inconclusive as to whether the forward actually touched a Samuel Junqua chip pass, but Picault's close-range presence was enough to freeze goalkeeper Cody Cropper in place as the ball crossed the line.

The Whitecaps were missing six players due to health and safety protocols, resulting in some inexperienced names added to the substitute list. That included Becher, a 23-year-old forward who was the 16th overall pick of the 2022 MLS SuperDraft.

Becher entered the game in the 82nd minute, and it took him only six minutes to open his scoring account. The play was set up by another MLS rookie, Ali Ahmed, with Becher capitalizing on a rebound.

Cavallini played 33 minutes as a substitute, returning after missing Vancouver's last game due a quad injury. However, Cavallini also received a yellow card, and will miss the Whitecaps' next game (Aug. 13 at the Los Angeles Galaxy) due to caution accumulation.