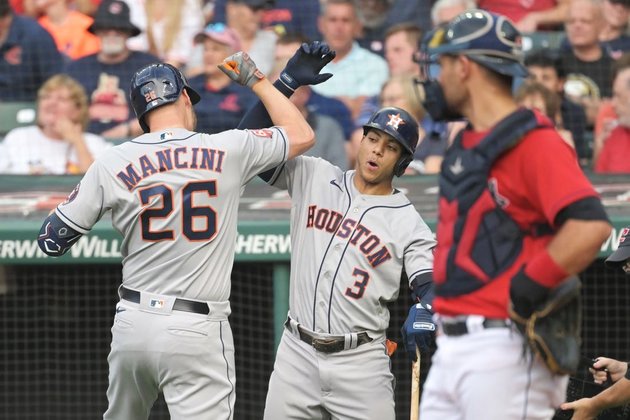 Trey Mancini belted a grand slam to highlight a two-homer performance, fueling the visiting Houston Astros to a 9-3 victory over the Cleveland Guardians on Friday.

Houston's Jose Altuve had an RBI double in the fourth inning as part of his three-hit performance. Yordan Alvarez, Yuli Gurriel and Martin Maldonado also drove in a run for the Astros, who banged out 14 hits and have outscored the opposition 21-4 during their three-game win streak.

Framber Valdez (10-4) won his third straight decision and improved to 4-0 overall in his career against Cleveland after allowing three runs on seven hits in 6 1/3 innings. He registered his 18th consecutive quality start to reside two shy of matching the franchise record, set by former National League Cy Young Award winner Mike Scott in 1986.

Houston bench coach Joe Espada guided the club in place of manager Dusty Baker, who tested positive for COVID-19. The Astros' Kyle Tucker sat out his second consecutive contest with a non-COVID illness.

Cleveland's Amed Rosario launched a solo homer in the first inning and Luke Maile and Myles Straw each drove in a run in the seventh. Rookie Steven Kwan went 0-for-2 to see his 18-game hitting streak come to a halt for the Guardians, who have lost seven straight home games to Houston.

Mancini answered Rosario's third homer in his last five games with a solo shot of his own in the second inning. Mancini crushed a 1-2 cutter from Hunter Gaddis (0-1), who was promoted from Triple-A Columbus to make his major league debut.

Alvarez gave the Astros a 2-1 advantage in the third inning by muscling an RBI single to left-center field.

Alex Bregman walked to load the bases before Mancini crushed a 3-1 fastball over the wall in left field. The homer was Mancini's 13th of the season and third in his last three games.

Altuve's RBI double to deep left-center field in the fourth inning gave Houston a 7-1 lead. That closed the book on Gaddis, who permitted eight runs on seven hits in 3 1/3 innings. Gurriel followed with a run-scoring groundout off Sam Hentges, with the earned run charged to Gaddis.

Cleveland scratched for a pair of runs in the seventh inning to trim the Astros' advantage to 8-3 before Maldonado capped the scoring with a sacrifice fly in the eighth.