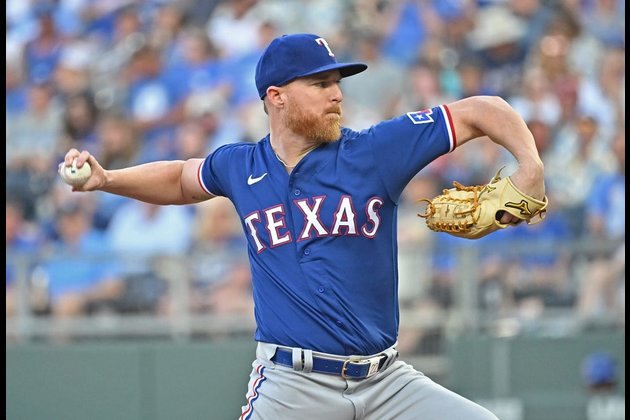 After struggling early this season, right-hander Jon Gray is settling in nicely with the Texas Rangers.

Gray (4-3, 3.89 ERA) aims for his fourth consecutive victory when he takes the mound against the host New York Mets in the rubber match of a three-game series on Sunday.

The 30-year-old allowed a total of 10 earned runs in his first three starts after signing a four-year, $56 million deal with the Rangers last December.

Gray matched his longest outing of the season last Tuesday, when he gave up one run on five hits over seven frames in an 8-3 win over the Kansas City Royals. He has lowered his ERA from 7.50 to 3.89 over his last 10 starts.

"I don't even think we've seen Jon Gray tap into what he's capable of," Texas manager Chris Woodward said. "Just kind of talking to him and seeing him pitch, I think there's another tier to his stuff."

Gray is 1-2 with an 8.87 ERA in five career starts against the Mets. He has limited New York third baseman Eduardo Escobar to five hits in 23 at-bats, including one homer.

Escobar has homered in back-to-back games for New York, which has lost four of its last five. The Mets have scored a total of 10 runs over that stretch.

One bright spot has been the improved play of Escobar, who appears to be heating up after entering the series hitting .222.

"We know that there's potential for him to get stuff like that going for an extended period of time," Mets manager Buck Showalter said. "I've talked a lot of times, sooner or later, guys chase their track record. We hope this is the start of it."

Right-hander Carlos Carrasco (8-4, 4.85) will start for New York in the series finale. He is looking to bounce back after allowing 11 runs in his last two starts across 6 2/3 innings.

Carrasco, 35, has given up seven home runs across his last four outings after allowing just three homers through his first 11 starts.

He allowed six runs on six hits over 4 1/3 innings in a 9-1 loss to the Houston Astros on Tuesday.

Mitch Garver and Marcus Semien are each 1-for-14 against Carrasco, who is 3-3 with a 6.10 ERA in 10 career games (eight starts) versus Texas.

The Rangers slugged four home runs in a 7-3 victory over the Mets on Saturday, including two by outfielder Kole Calhoun.

Jonah Heim and Leody Taveras also homered for Texas, which improved to 3-2 on its nine-game road trip.

New York is focused on securing a series victory, but the Mets will also have an eye on Jacob deGrom's minor league rehab outing for Class-A St. Lucie.

Sunday's outing will be the first this season for deGrom, who has been out with a stress reaction in his right scapula. He is expected to throw about 25 pitches and will likely need between three and five rehab starts before rejoining the Mets.

"He's hit every benchmark, and we're happy with that," Showalter said. "We'll see how he does on Sunday, and we'll see if there's any adjustments to the schedule we have that need to be made. We know where it could take us."