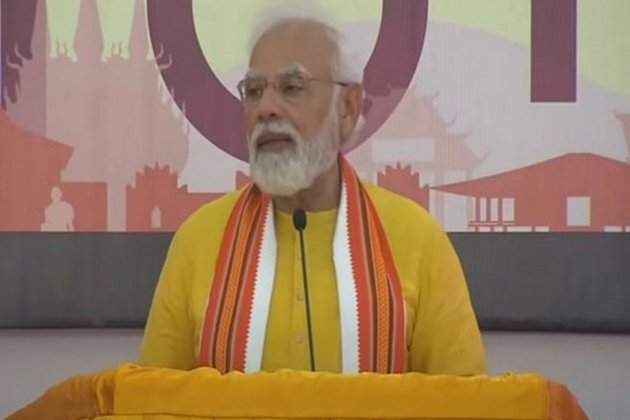 New Delhi [India], May 17 (ANI): Prime Minister Narendra Modi paid an official visit to Lumbini, Nepal on Monday, coinciding with the auspicious occasion of Buddha Purnima, at the invitation of the Prime Minister of Nepal Sher Bahadur Deuba. As Prime Minister, this was his fifth visit to Nepal and first to Lumbini.

Both of them laid the foundation stone for a technologically-advanced India International Centre for Buddhist Culture and Heritage in Lumbini, Lord Buddha's birthplace here.

"Prayed at the Mahaparinirvana Stupa in Kushinagar. Our Government is making numerous efforts to boost infrastructure in Kushinagar so that more tourists and pilgrims can come here," Prime Minister Modi has tweeted.

PM Modi attended the 2566th Buddha Jayanti Celebration at International Convention Center and Meditation Hall at Lumbini along with Deuba.

Once completed, the Centre will be a world-class facility welcoming pilgrims and tourists from all over the world to enjoy the essence of spiritual aspects of Buddhism, projecting India's growing soft power.

"The centre is being built at the initiative of the International Buddhist Confederation, New Delhi," he said.

The Centre will be a modern building, NetZero compliant in terms of energy, water and waste handling, and will house prayer halls, meditation centres, library, exhibition hall, cafeteria, offices and other amenities, the MEA said in a statement.

The Centre will be constructed by the International Buddhist Confederation (IBC), New Delhi, on a plot allocated to the IBC by the Lumbini Development Trust (LDT), under an agreement between the IBC and the LDT signed in March 2022, it said.

Despite India being one of the main centres of Buddhism in the world, it had no centre or project in Lumbini, the birthplace of Buddha.

Countries like Thailand, Canada, Cambodia, Myanmar, Sri Lanka, Singapore, France, Germany, Japan, Vietnam, Austria, China, South Korea and the United States are all represented by Centres of projects in the Monastic Zone. Under the Lumbini Master Plan of the Government of Nepal, approved in 1978, the Lumbini Monastic Zone came into being as a place housing Buddhist monasteries and projects from various denominations and countries.

Both Prime Ministers visited the Mayadevi temple, within which lies the birthplace of Lord Buddha. At the temple, the Prime Ministers attended prayers conducted as per Buddhist rituals and made offerings.

The Prime Ministers lit lamps and visited the historical Ashoka Pillar, which carries the first epigraphic evidence of Lumbini being the birthplace of Lord Buddha. They also watered the holy Bodhi tree that was brought as a gift by Prime Minister Modi during his visit to Nepal in 2014.

Prime Minister Modi together with Prime Minister Deuba participated in the "Shilanyas" ceremony for the construction of the India International Centre for Buddhist Culture and Heritage at a plot in Lumbini belonging to the International Buddhist Confederation (IBC) based in New Delhi. The plot was allocated to the IBC by the Lumbini Development Trust in November 2021.

The visit has provided further momentum to the multifaceted partnership between the two countries and advanced cooperation in key areas, particularly in education, culture, energy and people to people exchanges. Prime Minister Modi's visit to Lumbini also emphasizes the deep and rich civilizational connection between India and Nepal and the contribution of people on both sides to foster and promote it.

Both Prime Ministers held a bilateral meeting, during which they followed up on their discussions held on April 2 in New Delhi. They discussed specific initiatives and ideas to further strengthen cooperation in various sectors, including culture, economy, trade, connectivity, energy and development partnership.

The two sides agreed in principle to establish sister-city relations between Lumbini and Kushinagar, which are among the holiest sites of Buddhism and reflect the shared Buddhist heritage between the two countries.

PM Modi assured India's support in the development of Nepal's hydropower sector and in encouraging interested Indian developers to expeditiously explore new projects in this regard. Both Prime Ministers agreed to further expand educational and cultural exchanges to bring the people of the two countries closer. A Luncheon was hosted in honour of Prime Minister Modi by Prime Minister Deuba. (ANI)

BRUSSELS, Belgium: A document released by the European Union this week revealed that the bloc and its development finance institutions ...