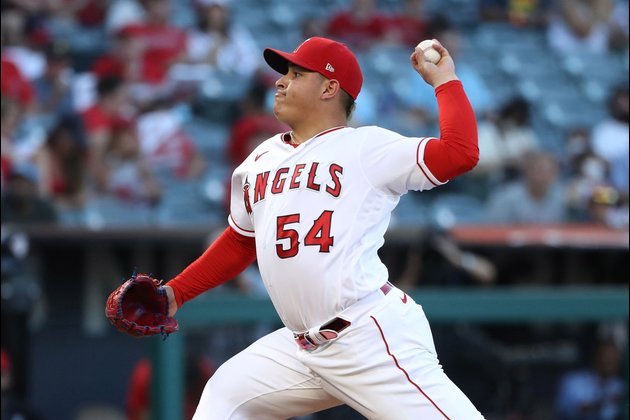 Jose Suarez threw the first complete game of the season for the Los Angeles Angels to lead them to a 4-1 win against the visiting Texas Rangers on Saturday night.

Suarez (6-7) gave up his lone run on a groundout in the ninth inning. He allowed five hits, struck out a career-high eight and didn't walk a batter. Suarez had not thrown more than 5 2/3 innings in his previous 26 major league starts.

Ohtani had the big blow against Allard, a three-run blast in the sixth inning that extended the lead to 4-0.

Luis Rengifo walked to lead off the sixth. David Fletcher followed with a routine ground ball to third baseman Charlie Culberson, but the ball went through his legs and into left field.

Ohtani then hit the next pitch from Allard deep over the fence in right-center field for his MLB-leading 43rd home run of the season.

Ohtani pitched seven innings and threw a career-high 117 pitches in a 3-2 win against the Rangers on Friday night.

Allard, who was born in Anaheim and grew up in South Orange County, retired the first seven batters to start the game before Lagares homered to left for his fourth of the season.

Suarez retired the first nine batters before Leody Taveras doubled to lead off the fourth. Tavares reached third with one out after an errant pickoff throw by Suarez, but he bounced back to strike out Adolis Garcia and DJ Peters to escape the inning.

Texas (47-88) also got its leadoff batter on base in the fifth, but Phil Gosselin made a nice running catch in left field with two runners on base to end the inning.

Gosselin was originally penciled in to play first base, but left fielder Justin Upton was a late scratch because of back tightness and Jared Walsh entered the lineup at first.

PARIS, France: In protesting the UK's refusal to grant more licenses to fish in British waters, French fishermen said this ...

WASHINGTON D.C.: To encourage a drop in sky-high gasoline prices, President Biden said the Department of Energy will release 50 ...

Vonage sells to Ericsson for $6.2 billon in merger of tech giants

DUBAI, UAE: Israel and Jordan have signed what is being labeled a most significant cooperation agreement to construct a major ...

SINGAPORE: Three months after Cambodia rolled out COVID-19 vaccines, just 11 percent of its population had received at least one ...

El Salvador plans to locate Bitcoin city at base of volcano

SAN SALVADOR, El Salvador: El Salvador President Nayib Bukele has announced plans to build a Bitcoin city at the base ...

US announces that 95% of federal workers vaccinated

WASHINGTON D.C.: Some 95 percent of U.S. federal workers have received at least one dose of a COVID-19 vaccine, or ...

Of 32 scholarships, 22 awarded to US women as Rhodes scholars for 2022

OXFORD, England: The Rhodes Trust has announced the 2022 class of U.S. Rhodes scholars, which includes the largest number of ...

KABUL, Afghanistan: Under new rules imposed by the Taliban government, women have been banned from appearing on television dramas in ...