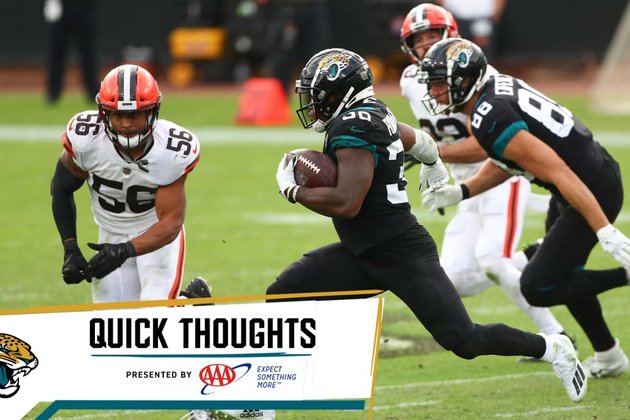 1.The timing made sense. Jaguars Owner Shad Khan dismissed General Manager David Caldwell Sunday following the Jaguars' 10th consecutive loss - and while the move seems overdue to many fans and observers, the timing made sense within the context of this season and the future. Caldwell, the Jaguars' general manager since 2013, was the team's final decision-maker from 2013-2017. That responsibility was held by Executive Vice President of Football Operations Tom Coughlin from 2017-2019, with Caldwell and Head Coach Doug Marrone both reporting directly to Khan since Coughlin's dismissal late last season. While many fans and observers expected a general manager change after last season, Khan wanted Caldwell and Marrone to have a chance without Coughlin's influence. And Caldwell did an admirable job this past offseason getting the Jaguars' salary cap in order for 2021 and beyond. But Caldwell and Marrone both entered this season believing they needed to win this season, and a third consecutive double-digit losing season was enough for Khan to change direction. Why now? With five games remaining, Khan can now begin the search for the next general manager - and therefore pick that person from a larger pool than if the search began in January. Look for Director of Player Personnel Trent Baalke to serve as interim general manager through the end of the season. Marrone and the coaching staff reportedly will remain intact through season's end.

2.Give Glennon a lot of credit. Mike Glennon said this week he had nothing to lose and planned to play free, and the veteran journeyman did exactly that Sunday. More importantly for Glennon and the Jaguars, he played well - perhaps better than he could have expected and certainly better than fans and observers expected from a quarterback who hadn't started in three years. Glennon completed 25 of 30 passes for 235 yards and two touchdowns with no interceptions and his two-yard touchdown pass to veteran Tyler Eifert gave the Jaguars a 19-7 lead early in the third quarter. Neither of Glennon's two-point conversion passes were successful, and he rightfully said afterward those were the game's key plays. But Glennon played more than well enough - and freely enough - to deserve a chance to start again next week against Minnesota. Now, whether Marrone will go with Glennon or Game 1-7 starter Gardner Minshew II ... stay tuned. Marrone wasn't ready to make that announcement Sunday.

3.Give the Jaguars' defense a lot of credit. The Jaguars were without three defensive coaches, including coordinator Todd Wash; that meant no defensive coaches on the field during the week and it meant safeties coach Joe Danna calling the defense Sunday. They also played without so many defensive starters Sunday it was hard to keep track, with the most notable absences defensive end Josh Allen and four of their top five cornerbacks - CJ Henderson (groin), Chris Claybrooks (core muscle), DJ Hayden (knee) and Sidney Jones IV (Achilles). The defense eventually wore down in the second half against the NFL's best one-two backfield combination in Browns running backs Nick Chubb and Kareem Hunt. But an early second-half takeaway caused by a forced fumble by Joe Schobert and some scrappy play early kept the Jaguars in it for a while. That was perhaps as good an effort as a gutty effort could expect given the circumstances.

1.Questionable. Why go for two points in the third quarter? I didn't like the idea of taking points off the board. But Marrone opted to take a point off the board and have Glennon try a two-point conversion pass in the third quarter with the Jaguars leading 19-17. The call forced the Jaguars to go for two points twice. They didn't get either and lost for the tenth consecutive week. Frankly, why did Browns Head Coach Kevin Stefanski pass on the field goal and an 11-point lead with that failed fourth-down run later in the game and give the Jaguars a shot at tying the game? Questionable calls from both sidelines on Sunday afternoon.

2.What a weird week. On Wednesday, the head coach announced a quarterback change and an overhaul of the defensive staff thanks to COVID-19. The safeties coach would call the defense, the defensive quality control coach would work the defensive line and the head coach was going to be working that side of the football all week long. You had backups and backups to the backups on the field with guys who just signed to the active roster. The defense was a shell of itself without Allen, Hayden and both starting corners - but the unit still made a few stops, took the ball away and gave the offense a scoring opportunity on the first play of the second half. The fourth-down stand at their own 22-yard line was awesome against Hunt and Chubb, but the defense wore down against the best one-two running back duo in football as the game went along. I thought the defense did everything it could to keep them in the game into the fourth quarter. Credit to Marrone and his staff for finding a way despite everything stacked against them this week.

3.Robinson for MVP. Glennon was a steady hand who made some nice throws and kept the chains moving but it was all on the back of rookie running back James Robinson - who ran for 50 yards in the first quarter and had the Browns defense on its heels. He has great vision and balance - and though he isn't going to run away from anyone, he has enough speed to make guys chase him. His 27-yard run in the fourth quarter put the Jaguars in a great spot to try and tie the game with less than five minutes to play and put him in the 100-yard-plus category again. We write it every week, but Robinson looks like a legitimate Offensive Rookie of the Year this season and a guy every talented small college player should identify with. His consistency is impressive.

4.Glennon gives you the best chance to win, hands down. He isn't spectacular, and he missed two open receivers on the final drive, but his steady presence in the pocket allowed guys like wide receivers Keelan Cole and Collin Johnson a chance to get down the field and make a few plays. He's not going to carry the offense, and that's a problem if wide receiver DJ Chark Jr. is down for any length of time. But if he has Chark, Laviska Shenault Jr., Johnson, Eifert and Robinson, he can keep the offense on the field and give them a chance to put up some points. The schedule now enters its most difficult stretch - well, it is if the Vikings, Titans, Ravens, Bears and Colts have their players on the field and not on the COVID-19 Reserve List. Glennon is the guy who gives you the chance to remain competitive.

SYDNEY, NSW, Australia - Stocks in Asia were sold off on Friday. All the major indices lost ground, while the ...

LIMERICK, Ireland - A boost for Ireland's expanding tech sector are plans by a giant telco supplier to recruit scores ...

As Trump said, Joe Biden is going to need a lot of luck

While Joe Biden's Presidency gives people a chance to rebuild, it also faces the bitterness and opposition of Trump's ever-loyal ...