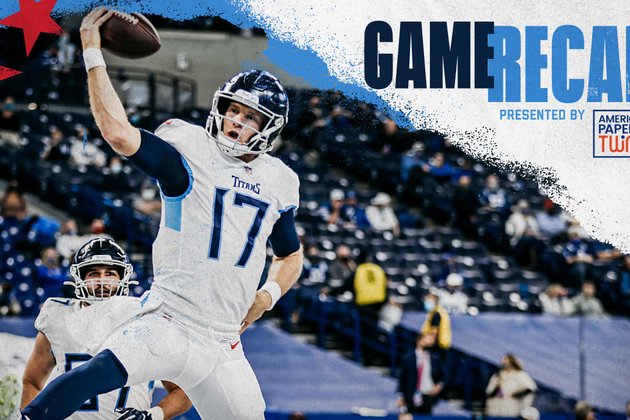 INDIANAPOLIS - The Titans showed up at Lucas Oil Stadium on Sunday and treated fans to their own version of the Indy 500 by racing past the Colts.

As a result, the road to the AFC South title has taken a detour through Nashville.

The Titans scored at a fast and furious pace early against the Colts and sped away with a 45-26 win -- and a spot alone atop the division with five games left to play in December. They looked like a racecar in the process, even with a giant Hummer, or hammer, in the backfield.

And after a shaky start, the defense played with some swagger, and success.

"It was a big win for us," Titans quarterback Ryan Tannehill said. "We knew coming in it was going to be a tough game - we have a ton of respect for (the Colts). We knew we were going to have to come out and start fast and be able to finish strong. Being able to start the way we did was huge, and we did enough down the stretch to be able to pull it off."

It's been quite the turnaround for the Titans, who appeared stuck in neutral following a November 12 loss to the Colts at Nissan Stadium. But the Titans have looked like a different team since, with back-to-back road wins at Baltimore and Indianapolis.

Did someone say, 'All gas, no brakes?'

Nonetheless, the Titans improved to 8-3 with the win, while the Colts dropped to 7-4.

"We were playing for first place, and we were going on the road," Titans coach Mike Vrabel said. "We knew it was a tough place to play. We played them 17 days ago and we knew it was going to be a challenge. I'm just proud of the way our guys finished.

"I think it was a combination of a lot of things - playing complementary football, playing better, coaching better."

Titans running back Derrick Henry ran for 140 yards and three touchdowns in the first half, and he finished the game with 178 yards on 27 carries. It was Henry's eighth straight road game with 100-plus rushing yards, which tied him with former Titans running back Chris Johnson for the second-longest streak since the 1970 merger.

Henry was a bruiser once again, one week after running for 133 yards and the game-winning touchdown at Baltimore. Henry leads the NFL with 1,257 rushing yards, and 12 touchdowns.

"I think we focused on what we could do as a team," said Henry, who scored on runs of one, 11 and 12 yards. "Being physical, finishing drives, getting off the field on third down as a defense ... and (doing well) on special teams, just playing an overall game, a great game, in all three phases. I feel like we did that today."

Tannehill engineered one drive after the next at the start, as the Titans scored 35 points in the first half with an offensive explosion. Tannehill completed 13-of-22 passes for 221 yards and a touchdown in the contest, and he also ran for a score as the Titans built a comfortable lead.

The Titans scored on their opening possession on a 12-yard touchdown pass from Tannehill to Henry, which capped a 10-play, 75-yard drive that featured an efficient Tannehill and a productive Henry.

After the Colts answered back with a an 11-yard touchdown pass from quarterback Philip Rivers to tight end Trey Burton, the Titans got on the board again with a quick strike - a 69-yard touchdown pass from Tannehill to receiver A.J. Brown, which gave the Titans a 14-7 lead with nine seconds left in the first quarter. Brown caught a pass across the middle from Tannehill, and then he outraced several Colts defenders into the end zone.

"Whenever I've got the ball in my hands I am trying to score - that is my mindset," said Brown, who finished the contest with four catches for 98 yards. "And (make sure) not get tackled inside the 10."

After the Colts answered back with a one-yard touchdown run by quarterback Jacoby Brissett to tie the game at 14-14, the Titans just kept on coming.

Smelling blood, the Titans kept their foot on the gas. A fourth-down throw from Tannehill to Davis put the ball at the Indianapolis one-yard line, and Tannehill ran it in for another touchdown, capping it off with a finger roll, and the Titans led 35-14 at halftime.

The Titans extended the lead to 38-14 late in the third quarter on a 49-yard field goal by kicker Stephen Gostkowski before the Colts added a pair of fourth quarter touchdowns -- a one-yard run by Brissett, and a pass from Rivers to receiver T.Y Hilton - to make it 38-26.

Brown capped off the scoring when he returned an onsides kick 42 yards for a touchdown with 2:29 left.

The Titans return to action next Sunday against the Browns at Nissan Stadium.

"At 6 and 3, I don't think we were down and out," Titans safety Kenny Vaccaro said. "But at the same time, we knew we had to play better if we wanted to separate ourselves from the pack. If we wanted to be a contending team, we couldn't play like we had played. Obviously now we have won two (in a row), two great wins. But we have to keep building and keep building, that way we improve into December and hopefully we're in the playoffs."