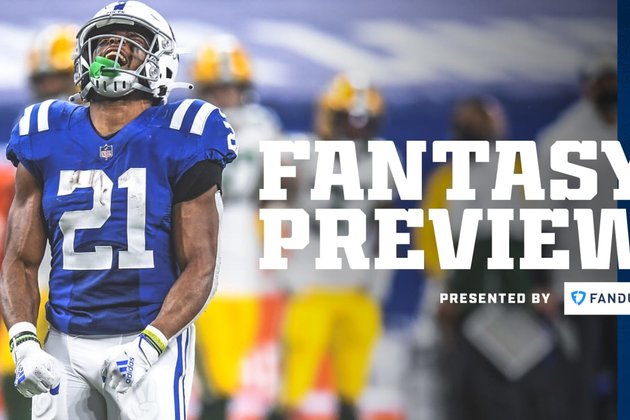 It's Colts-Titans: Round 2 today at Lucas Oil Stadium, as these two 7-3 teams duke it out for first place in the AFC South Division for the second time in 17 days. So what can you expect fantasy-wise from the Colts in this one? Andrew Walker

Just 17 days after their Week 10 matchup on Thursday Night Football, in which Indy went on the road and took care of business, 34-17, and grab control of the AFC South Division lead, the Colts take on the Titans once again with the AFC South lead on the line today in Week 12 action at Lucas Oil Stadium.

The Colts (7-3) had some top-notch fantasy performances last time out against the Titans (7-3), particularly at running back and from their defense/special teams units, but there will be some differences for the Indianapolis offense this time around, particularly at running back, as the Colts will be without rookie Jonathan Taylor, who was placed on the Reserve/COVID-19 list yesterday.

So what should you expect from the Colts players on your fantasy rosters in Week 12? We've got you covered here.

(Weekly positional rankings from FantasyPros.com, based on Half-PPR scoring. Ranks as of Saturday.)

» Week 10 matchup vs. Titans: Rivers had 18 total points; he completed 29-of-39 points for 308 yards with one touchdown; quarterback Jacoby Brissett also had a two-yard touchdown run for six points.

Rivers is on a bit of a roll, as he's averaged 22 points over his last five games, which, spread out over the season, would make him QB7 on the year and a must-start in your lineup. Now, the 38-year-old Rivers is dealing with a toe injury that has given him a questionable status heading into today's game, but there's been no indication to this point that he'll be limited in any fashion. So, considering Rivers' Week 10 performance vs. the Titans, his recent hot streak overall and Tennessee's general struggles against opposing quarterbacks, I'd say he's a quality option in your lineup today.

» Week 10 matchup vs. Titans: The Colts running backs' 30 combined points were a season-high against the Titans 17 days ago, with Nyheim Hines (115 combined yards, two touchdowns) leading the way with 23 points.

The developing news for the Colts at running back is rookie Jonathan Taylor - who leads the team with 135 carries, 518 yards and four rushing touchdowns - being placed on the Reserve/COVID-19 list on Saturday, meaning he will not play in today's game. As of now, the Colts are going to enter today's game with just two active running backs in Hines and Wilkins. It was Hines that got his first-career start last Sunday against the Green Bay Packers, so, much like Rivers, this is a favorable matchup for the third-year N.C. State product for a multitude of reasons: his recent history vs. the Titans, Tennessee's struggles against opposing running backs and his expected role in this game with Taylor out.

» Week 10 matchup vs. Titans: The Colts' wide receivers combined for 21 points back in Week 10, led by 12 points by rookie Michael Pittman Jr., who had his first-career 100-yard receiving game (seven receptions for 101 yards).

The Titans' defense allowed a season-low seven combined points to wide receivers last Sunday in their overtime win against the Baltimore Ravens, who had just nine total receptions for 70 yards. They also were without safety Kenny Vaccaro, who missed the game due to a concussion. With Vaccaro seemingly back today, and with former All-Pro Desmond King, who was acquired at the trade deadline, now firmly in the mix, could the Titans be on the brink of turning the tide in the secondary? The Colts sure hope not. Pittman Jr. is on a roll, having caught his first-career touchdown pass last week against the Green Bay Packers, which means he could earn even more attention; does that mean T.Y. Hilton could be a sneaky good addition this week? All that being said, however, it's tough to project the Colts' production at wide receiver on a week-to-week basis.

» Week 10 matchup vs. Titans: With Hines and Pittman Jr. the focal point of the offense that night, Burton and Alie-Cox combined for just four total points in that Week 10 game at Nissan Stadium; Doyle was inactive, meanwhile, with a concussion. Like at wide receiver, the Colts have so many solid options at tight end that it's tough to say which guy could have a big performance on a week-to-week basis.

» Week 10 matchup vs. Titans: The Titans have been one of the league's best against DSTs this season, but that certainly wasn't the case in Week 10 against the Colts, as E.J. Speed blocked a third-quarter punt that was recovered by T.J. Carrie and returned for a touchdown in the game-changing play of the night, leading to 13 total points - the most allowed by the Titans this season by far. One can imagine Tennessee will button up those special teams issues; defensively, meanwhile, the Colts on Sunday will be without three starters in defensive end/tackle Denico Autry and defensive tackle DeForest Buckner (Reserve/COVID-19 list) and linebacker Bobby Okereke (ankle), so they might not have their usual firepower. I'm not saying it'll be tough sledding for the Colts' DST in this one, but this might not be the ideal week to start them if you can help it and have a better option.