Six Things to Watch in Titans vs Colts on Sunday 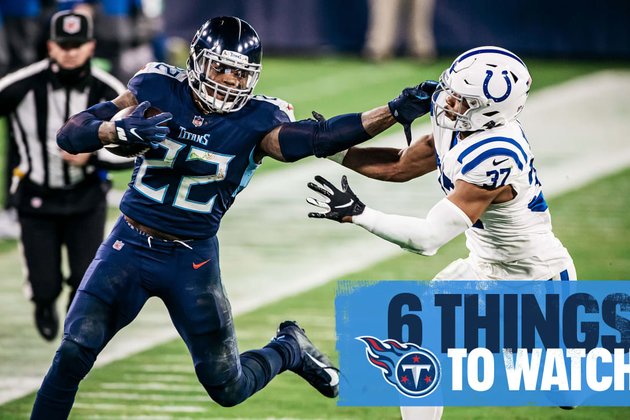 NASHVILLE - The Titans face the Indianapolis Colts on Sunday at Lucas Oil Stadium.

Here's a look at six things to watch:

"We all see it. We all see it." I'm sure you've seen the amusing insurance commercial on TV by now, where a blue-haired shopper gets the attention of onlookers who can't help from "becoming your parents." Well, we've also seen Titans running back Derrick Henry wear down defenses over and over again while taking over games in the process. Henry leads the NFL in rushing yards with 1,079, and he's coming off a game in Baltimore when he dominated late. In the team's Week 10 loss to the Colts, Henry went over the 100-yard mark (103) on 19 carries, but it was far from one of his signature games. The Titans need to ride Henry - with greater success - this time around.

Get off the Field

Look at the third down numbers in the first meeting against the Colts and things don't look so bad. Indianapolis was just 4-of-12 in third down (33%) in that game at Nissan Stadium, and that's a heck of a lot better than the 53.96% allowed by the Titans defense this year. The problem is the Titans allowed the Colts to convert 3-of-5 on fourth down in that Week 10 game, which left defenders frustrated and tired. The Titans need more of a killer instinct on defense the second time around, whether it's on first, second, third or fourth down.

One of the things missing against Indianapolis the first time around was a pass rush, as Colts quarterback Philip Rivers had all kinds of time while completing 29-of-39 passes for 308 yards and a touchdown. Unfortunately for the Titans, pressure has been lacking most the year, as the team has just 12 sacks on the season, led by outside linebacker Harold Landry's 3.5. The Titans are low on numbers at outside backers, which means Landry and Derick Roberson will be the primary two. So, will the Titans be more aggressive with blitzing?

The Titans had a forgettable night on special teams back on November 12, as they had a punt blocked that was returned for a touchdown, and back-up punter Trevor Daniel shanked another one that traveled just 17 yards. Kicker Stephen Gostkowski also missed a 44-yard field goal. Those are plays that help you get beat. The good news for the Titans is punter Brett Kern returned to practice this week and is expected to play, and Gostkowski settled down last week with a 3-of-3 performance. The Titans need to help themselves here.

Titans quarterback Ryan Tannehill is having another solid year. He's completing 65 percent of his passes, with 22 touchdowns and only four interceptions, and he's one of just three QBs (Patrick Mahomes, Aaron Rodgers) with 20-plus TDs and fewer than 5 INTs this season. He has two touchdown passes and a 90-plus passer rating in six of his last seven starts, and seven touchdowns vs only one interception for a 100.2 rating in six career games vs the Colts. Tannehill didn't have one of his best game back on November 12 vs Indy, when he completed 15-of-27 for 147 yards. The Titans will be looking for a better performance all around, and that includes the QB position.

Injuries have taken a toll on the roster in recent weeks, as the Titans have placed linebacker Jayon Brown, left tackle Ty Sambrailo and outside linebacker Jadeveon Clowney on Injured Reserve in the last week. As a result, the Titans have done some in-game shuffling, as well as getting others ready to play during the course of the week. The Titans moved tackle David Quessenberry and linebacker Will Compton into the mix on Sunday while exploring other options this week. Every NFL team has a "next man up" mentality, and Tennessee's is being put to the test. But will some others who missed last Sunday (Rodger Saffold? Kenny Vaccaro? Kern?) return to action on Sunday? Stay tuned.