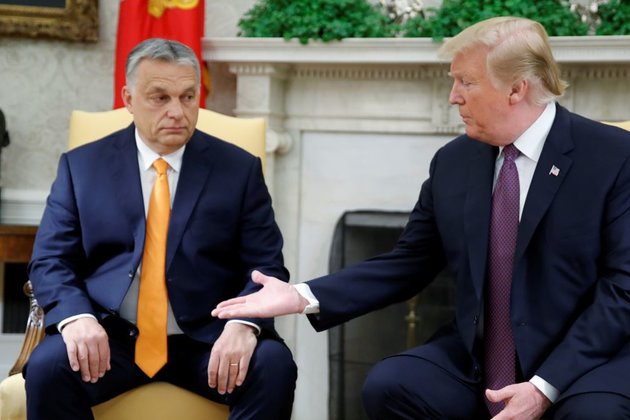 Hungarian Prime Minister Viktor Orban on September 21 endorsed U.S. President Donald Trump in his reelection bid, saying his rivals from the Democratic Party have forced 'moral imperialism' on the world.

'We root for Donald Trump's victory, because we know well American Democratic governments' diplomacy, built on moral imperialism. We have been forced to sample it before, we did not like it, we do not want seconds,' Orban wrote in an article published in the Magyar Nemzet daily.

Right-wing nationalist Orban faces parliamentary elections in early 2022 amid a steep challenge to his decade-long rule as Hungary braces for the economic and social impact of a second wave of coronavirus infections.

Orban wrote that the 2022 elections would be decisive as the international liberal elite was out to destroy Christian conservatives in Europe.

Hungary and other Central European countries would place economic efficiency over European Union policies such as 'climate goals elevated to absurdity, a social Europe, a common tax code, and a multicultural society', he said.

EU member Hungary's democracy score has been on a steep decline in the past decade, according to Freedom House.

In its latest Nations In Transit report published in May, Freedom House singled out Hungary as having the largest drop ever recorded in the 25 years since the nonprofit organization, largely funded by the U.S. government, published its first assessment.

The report describes Orban as a leader who has 'dropped any pretense of respecting democratic institutions.'

Press freedoms in particular have been in decline in Hungary since Orban returned to power in 2010. In recent years, many independent news outlets have either gone out of business or have been bought up by Orban allies.

With reporting by Reuters

Although global trade is making a frail recovery, the outlook remains uncertain, UN trade and development body UNCTAD said on ...

NW YORK, New York - There was much volatility on Wall Street on Wednesday as investors dithered with which direction ...

California recently announced that it plans to ban the sales of gas-powered vehicles by 2035, Ontario has invested $500 million ...

A time for borrowers to restructure loans and other debt obligations

JAKARTA, Indonesia - The economic impact of coronavirus crisis has been perceived. We have seen hundreds or even thousands of ...

India exporting to U.S. and China far more than it is importing

NEW DELHI, India, October 21 (ANI): A significant increase in India's exports to the United States and China, coupled with ...

SYDNEY, NSW, Australia - Stocks in mainland China rose sharply on Tuesday, a move at odds with the rest of ...

New Chinese train will run at 400 kilometres an hour

Photo taken on Oct. 21, 2020 shows the new type of high-speed train which can run on different rail systems ...

PARIS, France - France paid tribute on Wednesday to a history teacher beheaded last week by a man angered at ...

Polls point to Biden victory but Trump confident of reelection

Emirati ministers and officials on historic visit to Israel

ABU DHABI, UAE - Government ministers from the UAE boarded an historic flight to Israel on Tuesday morning.They were accompanied ...