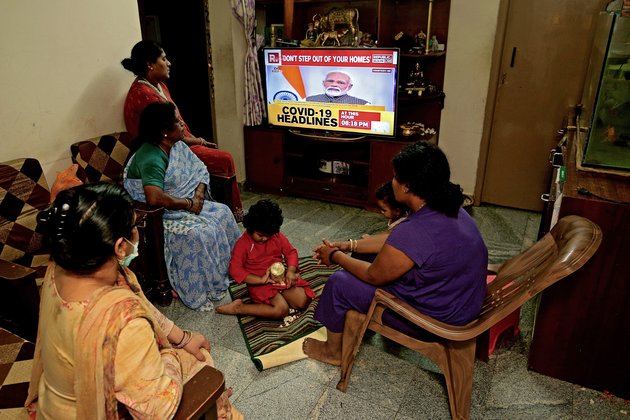 In Chennai, the capital of Tamil Nadu, I woke up to an eerie silence yesterday. The night before, India's prime minister, Narendra Modi, announced a 21-day national lockdown would start at midnight.

The next morning there was no one on the street and the local tea shop where factory workers, security guards and auto-rickshaw drivers congregate was closed. Several van loads of workers had been moved out of the factory premises nearby before the lockdown started. Street vendors selling fruit, tea and snacks had all left. All I could see were the police barricades, with officers stopping and questioning any passer-by.

While schools and other educational and recreational institutions across India had already closed the previous week, the scale of the country's coronavirus lockdown - of 1.3 billion people - is unprecedented.

India's finance minister, Nirmala Sitharaman, has now announced a range of measures including cash payment of R500 (Pound 5) per month for three months to all women members of self-help groups and an increase in wages as part of India's employment guarantee programme.

State governments in Tamil Nadu, alongside Kerala, Delhi, Rajasthan and West Bengal, have also expanded social protection measures during the crisis. In Tamil Nadu, factory workers - many of them migrants from other states, especially northern India - will receive rice, dal, oil and sugar free of charge, along with cash support of R1,000 (Pound 11) to meet other urgent expenses for the next two months. Rickshaw and taxi drivers and construction workers will also have access to these measures.

Half of India's 1.3 billion people are food insecure which means they lack access to sufficient safe and nutritious food. Around 60% of the poorest people from India's scheduled tribes and scheduled castes, are also anaemic. This means that a total lockdown, while it may help stop the spread of coronavirus, is likely to have a significant impact on food and nutrition. And while the initial reporting on the lockdown has been on cities and urban centres, where cases have been reported, little is known about the rural context.

Women on the frontline

In a forthcoming paper in Nature Food, I argue that while women form an integral part of the agricultural sector across South Asia, and often make up a majority of the agricultural workforce, they are often compelled to work for low or no wages and in poor conditions to meet their families' basic needs.

While their contributions are seen as central to the food and nutrition security of households and communities, the work they do is rarely recognised by those in charge. For example, women's agricultural work during peak planting and harvesting seasons makes them particularly time poor. This leaves them little time for domestic and care work, leading to inadequate childcare and poor health.

With this in mind, I have three main concerns about the lockdown and its possible impact on women in India.

First, women will continue to carry the primary responsibility for purchasing food, as well as preparing it for their households. It will be the responsibility of women to procure supplies from designated shops that supply rations. While it's unclear what the practical difficulties will be in distributing free supplies, there is also a need for cooking fuel, some vegetables and spices, and money to pay household rents and bills.

Devi*, who cooks and cares for my elderly parents, asked urgently for a part of the monthly salary to be transferred to her son's account. She wanted to purchase an LPG cylinder for cooking and some provisions before the lockdown. Both her sons, working as drivers, now have no work and no income, so she has become the sole provider, a cause for increased mental stress.

Second, in rural areas in the poorer states of northern and eastern India, most men migrate from around August to May after the monsoon planting season to earn a living in factories, construction sites and other businesses. They tend to head for the more developed states of southern and western India, including Kerala and Maharashtra, the two states worst affected by the pandemic so far. Apart from contributing to household food security, they try to save money to invest in their family farms.

In the Koraput district of the eastern state of Odisha, where my colleagues and I are conducting research with tribal groups on sustainable food supplies and agriculture, the local project coordinator, Vikas*, told me that truckloads of people have returned in the past week from the neighbouring states of Andhra Pradesh, Chhattisgarh, Karnataka and Kerala. Many of them were not paid their dues and will also not earn anything for the next few months. They could also be potential carriers of the virus.

Vikas and his group of youth volunteers are working to raise awareness, asking these returnee men to reduce interactions with other people in the village. But many of them live in one-room huts with their families and there are few places to self-quarantine.

It's too soon to say what the extent of infection is likely to be. However, my previous research in this area showed that due to strenuous work conditions, especially in brick kilns and construction sites in neighbouring Andhra Pradesh, migrant men often return sick. Despite bringing home some money, women's tasks as carers for them and their families get stretched. This is now likely to be further intensified.

For those men stuck in cities and unable to return home, there is a risk to their own food and health security. Ration cards are registered in their permanent rural residences and are usually in women's names. Out of work and without an income, in the absence of these ration cards, humanitarian social assistance is their only hope.

Third, the general poverty and lack of income for many Indian women could hinder food and nutrition security during the lockdown, particularly for those whose partners have lost work. Kerala has sought to involve women's self-help groups in food provisioning, especially the delivery of fresh, cooked meals, as part of its relief package.

But as well as ensuring food entitlements, it's critical the authorities strengthen care services. Unfortunately, as my colleagues doing ongoing research in southern Bihar have found, the primary health centres there are closed as a result of coronavirus and referral hospitals are ill-equipped. With childcare centres and schools also closed, there are no midday meals being served. As of March 25, take-home rations were not yet being distributed.

On the positive side, in the Koraput district of Odisha, our team did find some school authorities distributing the rations they held for midday meals to the households of children. The state has also begun paying state pensions for widows and disabled persons for three months in advance.

While these may be small measures, such innovations in state social protection need to be further strengthened to help women look after their families in rural areas, and to bear the new challenges posed by potentially infected men and institutional lockdown. Quick and effective delivery of support measures is now of utmost importance. The longer-term effects of the coronavirus pandemic in India could otherwise be even more severe and worsen food and nutrition insecurity for the poorest and most vulnerable.

* Names have been changed to protect anonymity.

Wimbledon set to be cancelled for first time since WWII

Wimbledon looks certain to be scrapped for the first time since World War II by tournament chiefs on Wednesday as ...

SYDNEY, NSW, Australia - Stocks in Asia closed sharply lower on Wednesday, except for Australia where the major index made ...

DUBLIN, Ireland - The European Commission on Tuesday approved a €200 million support package for Irish companies impacted by the ...

SYDNEY, Australia - Encouraging economic data out of China provided a boost to Chinese share markets on Tuesday, b ut ...

WASHINGTON, DC - U.S. airlines set to receive $25 billion in an initial tranche from the Federal Government may not ...

WASHINGTON - The U.S. Navy is evacuating thousands of sailors from the nuclear-powered aircraft carrier USS Theodore Roosevelt in Guam ...

WASHINGTON, DC - The U.S. military is rapidly ramping up its efforts to support the federal, and state governments in ...

UNITED NATIONS - How should the U.N. General Assembly and its 193 member states respond to the coronavirus pandemic? Members ...

European leaders are struggling to agree on how to handle the coronavirus pandemic. Their most recent disagreements are undermining European ...

U.S. accepts help from Russia in fight against coronavirus

Moscow has the biological strains that Washington needs to create a vaccine against its 2020's uninvited guest.U.S. President Donald Trump ...