UK in $3.5 billion order for hundreds of Boxer armoured vehicles 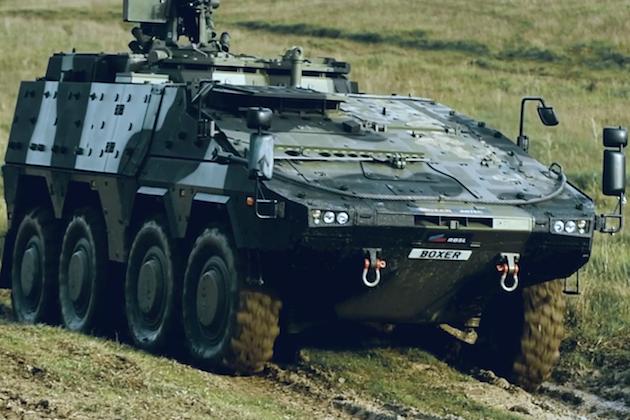 LONDON, UK - The British Army is spending $3.5 billion to acquire more than 500 new armoured vehicles to transport troops on the frontline.

"Our men and women of the Armed Forces deserve to have the best equipment to do their job," UK Defence Secretary, Ben Wallace said in announcing the order. He said the vehicles would begin arriving in units from 2023.

The vehicles will form part of the Army's Strike brigades, new units set up to deploy rapidly over long distances across varied terrains.

Boxer is described as being modular by design to meet these requirements - the same vehicle base can be rapidly reconfigured to fill different roles on the battlefield, from carrying troops across deserts to treating severely injured service personnel on the journey to hospital.

Initially the Army will buy a mixture of the troop-carrying variant, ambulances, command vehicles, and specialist designs to carry military equipment.

"This is excellent news for the Army and I'm delighted that we can now move forward with a contract for the Mechanised Infantry Vehicle," Sir Simon Bollom, Chief Executive of Defence, Equipment and Support (DE&S), said.

The UK played a central role in the original design, development and testing of the Boxer. In re-joining the programme last year, the UK reassumed the rights it had as a project partner.

Major General Simon Hamilton, Mechanised Infantry Vehicle Programme lead for the British Army, said: "I am delighted that we have committed to delivering the Mechanised Infantry capability through the purchase of around 500 battle-winning Boxer vehicles for the British Army. Boxer completes the suite of platforms to equip our new state-of-the-art STRIKE brigade where, alongside Ajax, Boxer's low logistic need, extended reach, high-mobility, and advanced digitisation will ensure STRIKE is ready for any global scenario."

The contract was signed ahead of the pre-election period as part of an agreement reached with industry and other OCCAR nations, which expires on December 31 2019. It would be possible for a new government to take a different position.

The Permanent Secretary of the defence ministry, as the Accounting Officer, said he considered the value for money implications and, on this basis, determined the most appropriate course of action was to proceed with the contract award ahead of the election.

MILAN, Rome: Business in China and the United States helped push up sales at Giorgio Armani by 34 percent in ...

SYDNEY, NSW, Australia - Stocks in Asia rose across the board on Thursday after China said it will continue to ...

PARIS, France: With European countries scrambling to contain new virus outbreaks with a litany of constantly-changing and last-minute rules, the ...

NEW YORK, New York - U.S. stocks were mixed on Wednesday despite a widening of the U.S. trade deficit, offset ...

OCRACOKE, North Carolina: Drones were successful in delivering vital supplies to a remote North Carolina island during a test this ...

Palestinian boy, 12, dies after being shot by Israeli troops

PALESTINIAN TERRITORIES - A 12-year old Palestinian boy has been shot dead by Israeli army soldiers in the West Bank, ...

SYDNEY, NSW, Australia - Hundreds of Australian Army soldiers are to be deployed to the streets of Sydney in a ...

SEATTLE, Washington: Blue Origin owner Jeff Bezos has offered to pay up to $2 billion in NASA costs if the ...

After Covid, parents opting for homeschooling for kids

WASHINGTON D.C.: Following the closing of the nation's schools during the Covid pandemic, more than 11 percent of all households ...

KANOSH, Utah: At least eight people were killed and ten injured in a 20-vehicle collision caused by a sandstorm Sunday ...

WASHINGTON D.C.: United Airlines is asking the federal government to reduce congestion at Newark Liberty International Airport, even as runway ...