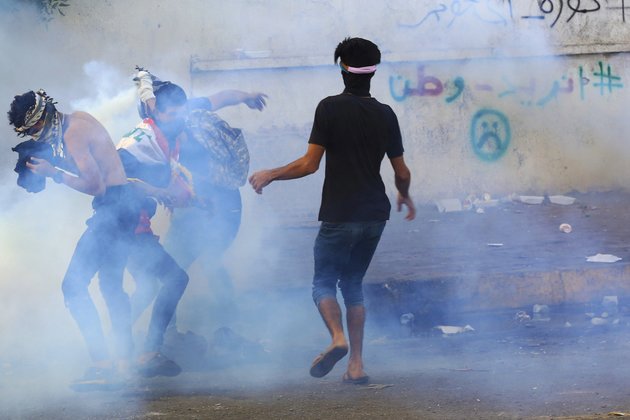 BAGHDAD - Iraq's most senior Shi'ite cleric urged political leaders Friday to find a way out of the current cycle of anti-government protests and a subsequent security crackdown that has left more than 250 people dead, saying the country faces "great risks" if it continues.

The protests continued to spread, with tens of thousands of people in the streets of Baghdad and across the largely Shi'ite south demanding sweeping political change. Demonstrators in the capital set up tents for a sit-in that extended to new streets and onto the banks of the Tigris River.

In the latest violence, 32 people were injured by rubber bullets and tear gas canisters in confrontations on Baghdad's famous Rasheed Street, its oldest avenue and cultural center known for its crumbling houses. Tear gas filled the air as protesters used slingshots to hurl stones at security forces.

Since the unrest erupted on Oct. 1, more than 250 people have been killed, many of them shot in the head and chest by security forces. Many activists have been arrested and in recent days, there have been reports that people have disappeared, apparently by force.

Rasool Mohammed, an activist from Baghdad's al-Sadr city, said four of his friends have vanished in the last few days.

The demonstrators complain of widespread corruption, lack of job opportunities and poor basic services, including regular power cuts, despite Iraq's vast oil reserves. They have snubbed government proposals for limited economic reforms, calling for its leaders to resign.

In Tahrir Square, epicenter of the protests, thousands chanted "Irhal, irhal!" or "Leave, leave!" as they urged Prime Minister Adel Abdel-Mahdi to step down.

In his Friday sermon, Grand Ayatollah Ali al-Sistani said it is the responsibility of the security forces to ensure peaceful protests and avoid using excessive force against the demonstrators.

Al-Sistani has always appealed for both sides to refrain from violence. On Friday, he said most of the protesters have remained peaceful but that a violent minority should avoid confronting security forces and attacking government buildings.

He also warned the protesters against being exploited by "internal and external forces" that for decades have had a role in harming Iraq. He didn't elaborate.

In a call to find a quick way out of the impasse, al-Sistani urged politicians to devise a plan that meets the protesters' demands.

"The political powers ... have a unique opportunity to respond to people's demands, according to an agreed upon roadmap, that should be implemented in a specific period to put an end to a long period of corruption," said Sheikh Abdul Mahdi al-Karbalaie, al-Sistani's representative. "It is no longer permissible to procrastinate on this issue because of the great risks facing the country."

The protests pose the biggest challenge to the government since it declared victory over militants from the Islamic State group nearly two years ago. Driven by economic grievances, the demonstrations have also exposed long-simmering resentment at the country's powerful Shi'ite political parties and militias with close ties to Iran.

Al-Sistani, in a nod to the militias that have played a key role in fighting IS, said no one should criticize those fighters in a way that undermines or ignore their sacrifices. "If peaceful protests and strikes are possible today away from the terrorists' harm, it is thanks to those heroic men," his representative said.

Iraqi state television reported that explosives experts found a bomb under one of the city's bridges and carried out a controlled explosion.

The Sinak bridge on the Tigris has been a daily flashpoint between security forces and protesters trying to force their way into the heavily fortified Green Zone, the seat of government. The report didn't elaborate or say why the bomb was not removed from such a key location before the controlled explosion took place.

Also Friday, security forces in the holy city of Karbala tore down tents at a sit-in site there, according to protester Amir Shami.

ROME, Italy - Global food commodity prices fell for the fourth consecutive month in May as the coronavirus (COVID-19) epidemic ...

SYDNEY, Australia - Stocks in Asia advanced on Thursday but gains were limited, and not universal.China's Shanghai Composite finished flat.The ...

PARIS, France, June 3 (Xinhua) -- France will maintain its planned tax on digital services at the Organization for Economic ...

SYDNEY, Australia - Stocks in Asia made strident gains on Wednesday, although on the Chinese mainland the advance was limited.The ...

MUMBAI, India - Saregama India on Wednesday announced a global deal with Facebook to license its music for video and ...

75% of consumers in UK, Australia and U.S. slam Chinese government

LONDON, UK - More than 75% of consumers in the UK, US and Australia blame the Chinese government for the ...

JERUSALEM - The only Palestinian industrial area in East Jerusalem is to be demolished, and the present occupiers of the ...

HOUSTON, Texas - Over 60,000 people showed up for a Houston protest and rally in the wake of George Floyd's ...

LONDON, UK - Altaf Hussain, the founder and leader of the Muttahida Qaumi Movement (MQM), has appealed to the United ...

There is no need to wonder why George Floyd (age 46) was murdered in broad daylight in Minneapolis, Minnesota, on ...

With the U.S. deciding to walk out of the Open Skies agreement, the U.S. is signaling to the world that ...