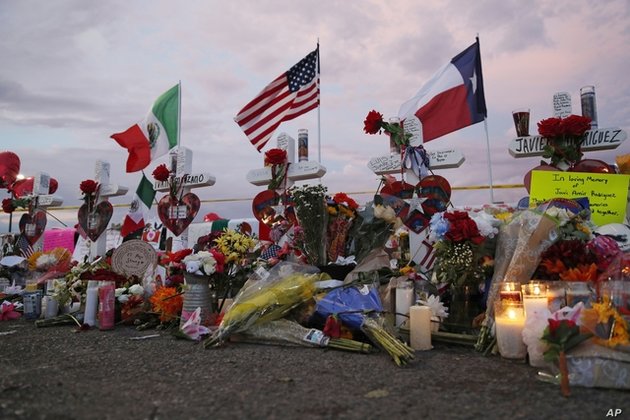 CAPITOL HILL - Lawmakers return to work on Capitol Hill this week facing new calls for gun legislation in the wake of three high-profile mass shootings over the summer.

U.S. President Donald Trump was set to meet with Senate Republicans late Tuesday to discuss possible legislative solutions that could include so-called "red flag" bills that would allow family members and law enforcement to go to court to keep guns out of the hands of high-risk individuals. Earlier Tuesday, the House Judiciary Committee began drafting legislation that would ban high-capacity ammunition magazines.

The renewed calls for Congress to address mass shootings has proved particularly sensitive for members of the Texas congressional delegation. Mass shootings in El Paso and Midland-Odessa where a total of 29 people were killed marked the third and fourth times Texas, one of the nation's largest states, has experienced major tragedies due to gun violence in the past two years.

Many Texans are proud of their state's reputation for a strong gun culture. Texas is one of 45 "open carry" states nationwide that allow individuals to apply for a permit to carry a handgun in public. More than 1.2 million Texans have active conceal-carry permits, according to the Texas Department of Safety. There are no state laws regulating the possession of shotguns and rifles and no requirement for universal background checks, including gun show sales.

But with the majority of Texans now living in metropolitan areas, and the political makeup of the state shifting to favor Democrats in some areas, the stereotypical image of a gun-toting Texan may be changing.

Here is where some of Texas' representatives stand:

Speaking in Texas the week after the shooting, Sen. John Cornyn said, "We need to do everything we can to try to provide people who are in mental health crisis, for example, access to help that might prevent them from being a danger to themselves and others."

Cornyn appeared to support an effort to close loopholes in the background check system that allows unqualified buyers to slip through.

"To improve the background check system to make sure people don't fall through the holes and they can't lie, and then buy firearms for which they are disqualified already by law from purchasing," he said.

But the details of such an effort would largely depend on what Trump appears willing to sign, given Senate Majority Leader Mitch McConnell's statement that he would wait for White House approval before putting bills up for a vote.

Republican Ted Cruz, the junior senator from Texas, doubled down on protections for gun owners in the aftermath of the shootings. On Twitter, Cruz defended a Texas state legislator who said he would not allow the evil acts of a handful of people to diminish the "God-given rights of my fellow Texans."

Cruz said the Bible repeatedly recognizes the right to self-defense, and that the right to bear arms spelled out in the Second Amendment of the U.S. Constitution "wasn't to protect people's ability to hunt, or to shoot target practice, but to defend their lives, their homes & their families."

He added he was leading the fight in the Senate to stop violent criminals and the mentally ill before they committed murder. Cruz made it clear that restrictive gun control measures would not be part of his solution, tweeting, "Forcible gun confiscation (as some 2020 Dems urge) won't prevent mass-murders. But it would weaken our self-defense."

After initially appearing to support some gun control proposals, Trump warned that such attempts could be "a slippery slope" leading to an erosion of Second Amendment rights.

Republicans represent 23 of Texas' 36 U.S. House Congressional districts. The Aug. 31 Midland-Odessa mass shooting occurred in the district of Republican Congressman Mike Conaway, who tweeted he and his wife were "praying for our men and women in blue, victims, first responders on scene, hospital staff preparing for the worst, and loved one's of ALL affected by this senseless act of violence in Midland/Odessa."

Conaway's office did not respond to a VOA request for comment on possible legislative solutions addressing the mass shootings.

The eight-term congressman was one of a handful of unexpected Republican retirements in the Texas delegation over the summer recess, which many analysts believe points to possible political changes in the Lone Star state ahead of the 2020 presidential election.

Texas Republicans who are running for re-election next year noted the complexities of attempting to prevent future mass shootings.

Congressman Mac Thornberry, ranking member on the House Armed Services Committee, said on KXAN-TV's "State of Texas" program that his constituents understood there were no easy solutions to mass shootings.

"We're all grappling with those answers," Thornberry said. "Simplistic sort of, 'Oh, let me just pass this bill and it will all stop.' Obviously, that's not true, and my constituents know it's not that simple. There are deeper issues involved here."

Freshman Congressman Dan Crenshaw has said he supports the TAPS Act, a proposal by Congressman Brian Babin, his colleague among Texas Republican House members, that would fund a Secret Service-pioneered threat assessment approach to protecting communities from mass casualty events.

Crenshaw had to clarify his position on red flag laws after saying it might be possible to implement those laws on a state level. After receiving criticism on social media, he clarified that "making sure that due process could not be abused is at the heart of any conservative solution to the so-called red flag laws."

Like many Republicans, Crenshaw said he could only vote for red flag legislation if safeguards protecting against false accusations are put in place.

But with tough congressional elections looming for many Texas Republicans, only Trump's unwavering support for such a proposal would be enough to put a politically risky vote on the floors of the U.S. Senate and House.

DUBLIN, Ireland - While its future on the other side of the Atlantic, and in the Pacific, is up in ...

SEARCA to get behind regional coconut industry

WASHINGTON, DC - President Donald Trump interrupted his press briefing on the coronavirus on Tuesday night to enthuse over the ...

Isreeli empathy for Lebanon draws fire from within

BEIRUT, Lebanon - The Lebanese cabinet has ordered port officials who had roles in storing or guarding highly explosive materials ...

WASHINGTON, DC - The Trump administration said on Wednesday it was stepping up efforts to purge "untrusted" Chinese apps from ...

More than 100 villagers fled their homes in Myanmar's northern Shan state into China as fighting broke out between ethnic ...

BEIRUT, Lebanon - The world has been shocked by the severity of a huge blast which has rocked Beirut, killing ...

No precedent for Trump to take cut of TikTok deal

NEW YORK, New York - President Donald Trump's demand that the U.S. government get a cut from a potential Microsoft ...