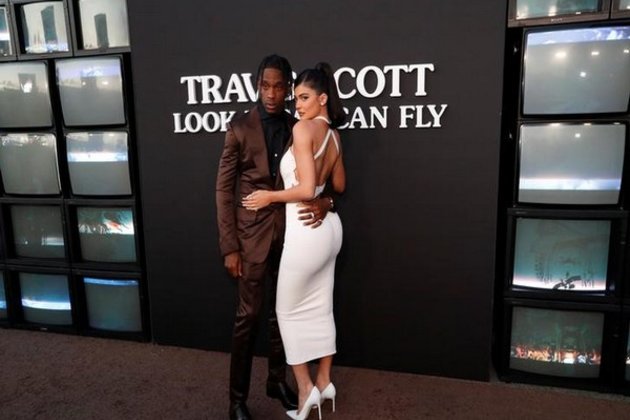 Washington D.C. [USA], Sept 10 (ANI): Kylie Jenner nearly stripped down as she featured on the latest issue of Playboy magazine with boyfriend Travis Scott by her side.

The 22-year-old beauty mogul unveiled the first photo from her bawdy shoot on Instagram by referencing both her and the rapper's hometowns saying, "When Houston meets LA .. @playboy ComingSoon."The 'Keeping Up with the Kardashians' star can be seen embracing the rapper in the sensual photo as she poses completely nude with only a cowboy hat worn on her head. Most of Jenner's body remains concealed apart from her butt. Meanwhile, Scott stands shirtless wearing only a pair of jeans with his diamond necklace and watch, reported People.

According to Playboy, as reported by People, Jenner and Scott are featured in the magazine's Pleasure Issue. The beauty entrepreneur stars on the cover, which is shot by her longtime personal photographer Sasha Samsanova and creatively directed by Scott himself.

Jenner and Scott are proud parents of a 19-month-old daughter, Stormi Webster. (ANI)

NEW YORK, New York - U.S. stocks weakened on Thursday but the biggest market-mover was the U.S. Dollar which soared ...

Hub for technology-based startups to be developed in Philippines

NEW YORK, New York - U. S. stocks were solidly higher on Wednesday. The dollar too made good ground, particularly ...

MOSCOW, Russia - An international appeals court in the Netherlands has ordered Russia to pay $50 billion in compensation to ...

CHICAGO - Scientists in China who studied the nose and throat swabs from 18 patients infected with the new coronavirus ...

LONDON, UK - The White House has denied a claim aired in a London court this week that President Donald ...

JERUSALEM - Israeli Prime Minister Benjamin Netanyahu says Israel is having discussions about the implementation of direct flights from Tel ...

WHO declares 'progress' in fight against coronavirus

The World Health Organisation on Wednesday hailed "tremendous progress" in the fight against the deadly new coronavirus since it emerged ...

Whereabouts of concelebrating priests not established at Pell trial

Dr Chris Friel examines another of the many concerning aspects of the child sexual abuse case against Cardinal George Pell.This ...

The Man Who Fell to Earth

Man Who Fell to Earth