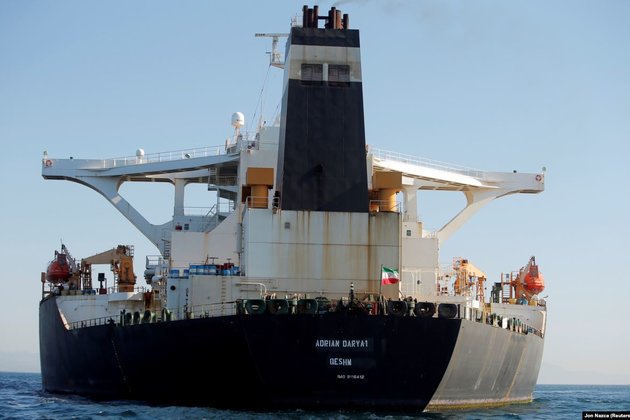 An Iranian-flagged oil tanker that has been pursued by the United States in the Mediterranean Sea for weeks says it is now heading for a port in Turkey.

The crew of the Adrian Darya 1, formerly known as Grace 1, changed its listed destination in its Automatic Identification System (AIS) to Mesrin, Turkey, early on August 24.

Experts note that the crew of a vessel can input any destination in the AIS system.

The ship-tracking website MarineTraffic.com showed the Adrian Darya's position as just south of Sicily in the Mediterranean Sea.

The Adrian Darya was held for weeks off Gibraltar after being seized by authorities there on suspicion of violating EU sanctions on Syria.

The United States has a warrant in federal court to seize the ship and has been warning nations not to accept it.

Based on reporting by AP and MarineTraffic.com

SAN JOSE, California - Apple has added a new toggle that addresses privacy concerns around the location tracking feature on ...

DUBAI, UAE - The 800MW third phase of Dubai's solar park will be operational in April, the Dubai Electricity and ...

WASHINGTON, DC - The Pentagon on Thursday awarded more than half-a-billion dollars in defense contracts.With around 0.53 cents in every ...

SYDNEY, Australia - Stock markets in Asia finished in the black on Friday, despite the release of economic data in ...

Prince Harry and Meghan to cut formal ties with Palace

More than one billion mammals, birds, and reptiles across eastern Australia are estimated to have been affected by the current ...

Decriminalisation of blasphemy in Ireland comes in to effect

DUBLIN, Ireland - The commencement of the Blasphemy (Abolition of Offences and Related Matters) Act 2019 in Ireland has taken ...

WASHINGTON, DC - High profile lawyers Alan Dershowitz and Ken Starr have been brought in to work with the legal ...