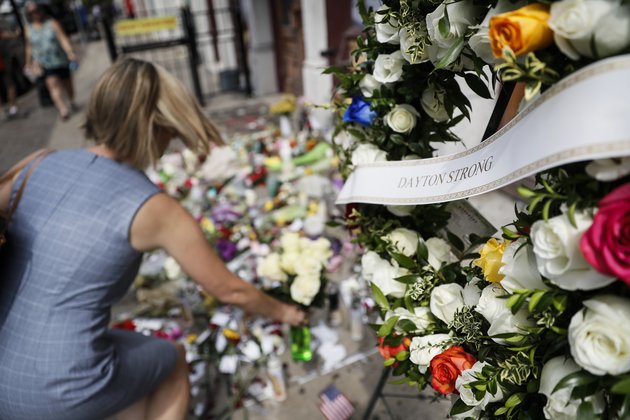 U.S. authorities said Monday that a friend of the Dayton, Ohio, gunman who killed nine people in a 30-second burst of mayhem bought him body armor, a gun accessory and a 100-round magazine earlier this year.

Prosecutors in the Midwest city said that Ethan Kollie told authorities that he bought the items for the shooter, Connor Betts, and kept them at his apartment so the shooter's parents would not find the gear.

The details behind the items used by Betts surfaced as the authorities charged Kollie with lying about not using marijuana on a federal firearms form he filled out to buy a pistol that was not used in the mass shooting.

Betts, 24, carried out the attack in the nightlife district of Dayton early on Aug. 4, killing his 22-year-old sister, Megan Betts, and eight others and wounding 27 more before police spotted him and killed him just as he was about to run into a bar. Police have yet to disclose a motive behind the assault.

The Dayton carnage occurred 13 hours after authorities allege that a Texas man targeted and shot Hispanics at a Walmart store in the U.S.-Mexican border city of El Paso, killing 22 and injuring another two dozen. The accused shooter, Patrick Crusius, 21, had complained about an "invasion" of Texas by Hispanics. If convicted, he could face the death penalty.

CHARLOTTE, North Carolina - General Motors is to open a new technical center focused on performance and racing in the ...

DENVER, Colorado - The U.S. Federal Aviation Administration (FAA) has issued a Finding of No Significant Impact/Record of Decision for ...

DUBLIN, Ireland - The importance of the tourism industry to Ireland has been highlighted in a report which has examined ...

SYDNEY, Australia - Shares in China dropped sharply on Friday as two populous cities in the country went into lockdown ...

Huanggang locks down over coronovirus threat

BEIJING, China - The authorities in Huanggang city in China have imposed a quarantine lockdown in a bid to stop ...

WASHINGTON, DC - Thirty-four U.S. service members have been diagnosed with concussion and traumatic brain injuries as a result of ...

BEIJING, China - The death toll and infected rate from the Wuhan coronavirus in China has increased dramatically, while the ...

LINGAYEN, Pangasinan, Jan. 24 (PIA) - As China is grappling to contain an outbreak of coronavirus, in the Philippipines, the ...

The Hunt for Red October