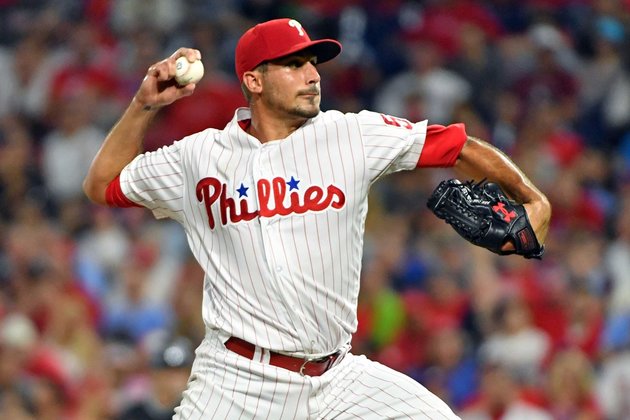 The Philadelphia Phillies are competing for the National League East title. In fact, they enter the weekend holding a one-game lead in the race.

The Padres, meanwhile, are auditioning players for what they hope will be a 2020 -- okay, maybe 2021 -- run at the National League West crown.

In fact, the Padres will be taking a first look at one of their leading prospects Friday night when 22-year-old right-handed starting pitcher Jacob Nix makes his major league debut.

Nix will have one thing in common with the Phillies starter, right-hander Zach Eflin. Both were drafted by the Padres.

The 6-foot-6, 215-pound Eflin was the 33rd overall pick in the first round of the 2012 draft. The Padres traded him to the division-rival Dodgers on Dec. 18, 2014, in the ill-fated deal that brought outfielder Matt Kemp to the Padres. The following day, the Dodgers traded Eflin to the Phillies for Jimmy Rollins and cash.

Friday night will mark the first time that Eflin has faced the team that drafted him or any of its players.

Nix is 6 feet 4, 220 pounds. He is regarded as one of the Padres' top 15 prospects and might have been promoted to the Padres sooner had he not suffered a strained groin muscle in spring training. The injury delayed the start of his season until the end of May.

Nix made nine starts with Double-A San Antonio and was 2-3 with a 2.05 ERA and a 0.91 WHIP in nine starts before being promoted to Triple-A El Paso, where he made only one start before getting the call from the Padres.

In that one start with the Chihuahuas on Aug. 4, Nix allowed five hits and no walks with three strikeouts over six shutout innings -- giving him a combined 1.84 minor league ERA this season with a .215 opponents' batting average.

Nix was drafted in the third round by the Padres in 2015 out of the IMG Academy in Bradenton, Fla. That was one year after the Houston Astros failed to sign the Southern California native as a fifth-round draft pick.

Nix will be the third Padre to make his major league debut in the past four games, joining right-handed starting pitcher Brett Kennedy and right-handed reliever Trey Wingenter.

Philadelphia is 1-2-1 in its last four series after dropping two of three in Arizona, including a 6-0 decision on Wednesday. The Phillies are 11-8 since the All-Star break.