Pipeline King Kinder rakes in $1.5 bn in one day 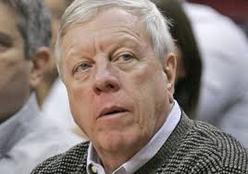 WASHINGTON - Richard Kinder, chairman and chief executive officer of Kinder Morgan, just got richer by a whopping $1.5 billion after the largest pipeline company in America announced a deal to buy up its three independently traded partnerships for an all-in price of $71 billion

The second-largest energy transaction ever will enable the billionaire CEO to consolidate under one corporate roof a network of separate entities strung together.

"We have such a broad platform, virtually anything in the midstream area would fit us," Chairman and CEO Kinder told investors on a conference call.

The proposed deal seems sensible for Kinder because the company had grown so large and was paying out so much of its cash to its general partners that it was hindered in making acquisitions by a higher cost of capital, he said.

Those payouts to general partners amounted to about 40 percent of profits, a source familiar with the deal said.

"This is no way a swipe at MLPs in general," Kinder told investors.

Kinder himself made $1.5 billion on the increase in his shares after stocks in all four units rallied Monday, with Kinder Morgan shares rising 14 percent.

Kinder Morgan, headquartered in Houston, Texas, operates some 80,000 miles of oil and gas pipelines. Experts suggested that the deal has simplified a complicated corporate structure that carried big tax benefits for its partners while also resulting in higher borrowing costs.

"It's very much unique to their current structure."

The new corporation will make Kinder Morgan the fourth largest-energy company in the US.

The market seems to approve of the second largest energy deal- which includes $44 billion in cash and stock and the assumption of $27 billion in debt, since Exxon bought Mobil in 1999 for $74.5 billion

Richard co-founded Kinder Morgan in the late 1990s after losing out to Ken Lay to be chief executive of Enron, and Kinder proceeded to cobble together a bunch of cast-off assets from Enron.

In doing so, he pioneered the master limited partnership (MLP), a corporate tax structure that has come to dominate the pipeline industry.